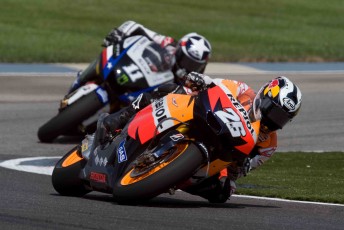 Is Dani Pedrosa a real chance of winning the 2010 MotoGP title? Victory at the Red Bull Indianapolis Grand Prix certainly helped, with the Spaniard narrowing the gap to leader Jorge Lorenzo to 68 points with seven rounds remaining.

Pedrosa stormed to the win at the famous Indianapolis circuit, the third win for the season on his Repsol Honda, and the first time he has scored three wins in a season in MotoGP.

Pedrosa led home local hero Ben Spies. The American started from pole – the first of his MotoGP career – and his race result capped off a top weekend which also saw him confirmed as a factory Yamaha rider for 2011.

Championship leader Lorenzo completed the podium after qualifying second but dropped to fifth at the start. Lorenzo battled his way past Andrea Dovizioso and into third just before the midway point, finishing just over three seconds off Spies as his phenomenal record of having placed in the top two in every race this season was finally broken.

For Australian Casey Stoner, the race ended in disappointment when he lost the front end of his Ducati on lap eight. He failed to finish and dropped to fourth in the title.

Valentino Rossi (Fiat Yamaha) ended with the reigning World Champion in fourth, edging out Repsol Honda rider Dovizioso. Nicky Hayden was sixth having started from the front row for the first time in his Ducati career.