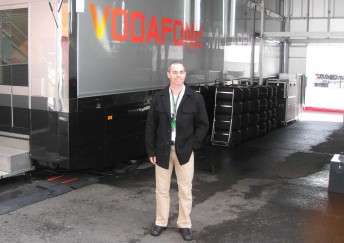 Nice suit Craig! The four-time Bathurst winner was quite at home at Spa

G’day Speedcafe readers and welcome to Spa-Francorchamps, Belgium – the final stop on my European tour.

We arrived in Spa on Thursday afternoon and after a casual breakfast on Friday morning it was finally time to head to the track for the part of the trip I had been waiting for.

We arrived in plenty of time for the second practice session, but before that we were lucky enough to participate in the Pit Lane Walk, which gave us the opportunity to look at the cars close up. I really never get tired of looking at Formula One cars up close – they really are like pieces of art.

Formula One practice was definitely a highlight of the day and the continual rain looked to dry up slightly as soon as the cars were on track. The circuit is just amazing and I know its cliché, but television just doesn’t do it justice. Eau Rouge is just so steep and would be a real handful in any type of car. I would love to race there again one day, that’s for sure. Lowndes says the Eau Rouge is steeper than the television lets on ...

While we were looking around the paddock I caught up with a few old friends at McLaren and also Marc Hynes from Virgin Racing. Marc is an old friend and he has raced with TeamVodafone at Bathurst before. It was great to catch up with those guys and Marc was nice enough to invite myself and some Norton customers into the Virgin Racing pits to watch practice and listen to the team over the radio.

For the afternoon, we retreated back to the F1 Paddock Club to watch the rest of the day’s practice and racing. It’s an amazing place and even has a full-day spa service, so you can actually get a massage while watching the F1 practice. I didn’t try it out, but I was tempted!

Once we left the track we headed back to the hotel to freshen up before my final dinner in Europe. Once again, Norton had organised an awesome night and it was a nice way to thank everyone for an amazing trip.

On Saturday we arrived at the track early as I wanted to make the most of the day before I had to head to the airport at 3pm. The weather remained the same overnight with constant rain and drizzle throughout the day. All I could think about was what a nightmare it would be to try and set the car up for a place like this, where you didn’t know if it was going to be wet or dry.

As if the trip hadn’t been good enough, Saturday really did bring the highlight of the trip for me. The McLaren team gave us a tour of its pit paddock area and the pit garage, so we got to see the cars and drivers up close and personal. It was an amazing experience. The sheer size of the McLaren operation is mind blowing and does make V8 Supercars seem quite small in comparison.

After we headed back upstairs to the Paddock Club suite to watch the support races and F1 qualifying and in a nice end to the weekend the rain held of just long enough for Aussie Mark Webber to get pole.

While it was a pity to have to leave before the race, it was a great trip and I really do have to thank Norton for the opportunity to come along. It was a great way to spend the mid-season break and now I can’t wait to get in the car for Phillip Island 500 and Bathurst 1000.

Until then, keep smiling!