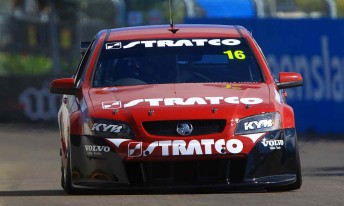 In terms of results, there hasn’t been much to talk about for the #16 car this year. However, there is a great story inside this entry for the V8 Supercars endurance races at Phillip Island and Bathurst.

Douglas was diagnosed with lymphoma (cancer) earlier this year and underwent months of chemotherapy, fighting his illness. He made a comeback to the Fujitsu V8 Series at Townsville, taking the best result of his career and has been rewarded with a seat at Kelly Racing.

Don’t expect to see the red Stratco Commodore VE fighting for the win, but know that there is a lot of fight from within the driver’s seat …