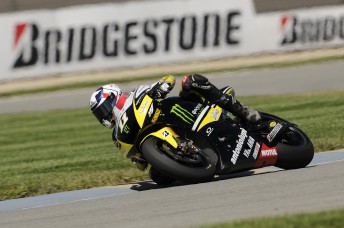 Ben Spies on pole in Indianapolis

Ben Spies continues to live up to the hype, this time securing his first ever MotoGP pole position in his own backyard at the Indianapolis Motor Speedway.

The Monster Yamaha Tech 3 rookie posted a best time of 1:40.105 on his 26th of 28 laps, delighting the home crowd and adding to the confirmation that he will replace Valentino Rossi in the factory squad from 2011.

“This is a great feeling for me to get my first MotoGP pole position and for it to come in front of the American crowd and here at Indianapolis with all the history makes it even more special,” said Spies.

“And I’m glad for the Monster Yamaha Tech 3 Team too. This team helped catapult me into this position and I’ve been trying to give as much for them as I can, even though I’ll be moving to Yamaha’s factory team next year.”

Spies was 0.220s quicker than championship leader and last year’s race winner Jorge Lorenzo who took his Fiat Yamaha M1 machine. There was further joy for the US race fans as Nicky Hayden completed the front row in his Ducati. Hayden was just a hundredth of a second behind Lorenzo on the timesheet in a typically action-packed and frantic hour-long session.

Andrea Dovizioso had held top spot briefly and his best time of 1:40.559 placed him fourth on the starting grid, with his Repsol Honda team-mate Dani Pedrosa fifth at just under eight-hundredths further back. Australia’s Casey Stoner, who had been fastest in both practice sessions, could only qualify in sixth as he lapped 0.559s off the pace of Spies on his Ducati Desmosedici GP10.

The third row will be headed up by Rossi (Fiat Yamaha) and the Italian was left frustrated but uninjured when he fell at turn six with little over five minutes to go – his second fall of the day following an earlier one in practice. Marco Simoncelli (San Carlo Honda Gresini) also had a crash in the final stages of the session but managed to secure eighth place, equalling his best qualification so far this season, with Colin Edwards (Monster Yamaha Tech 3) and Loris Capirossi (Rizla Suzuki) completing the top ten.

Hiroshi Aoyama (Interwetten Honda MotoGP Team) was 13th in his first QP since returning from injury, whilst Aleix Espargaró (Pramac Racing) had a fall at turn 13 and eventually qualified in 14th.