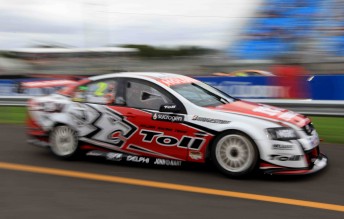 The Toll Holden Racing Team has confirmed its endurance driver line-up for the L&H 500 at Phillip Island and the Supercheap Auto Bathurst 1000.

As reported previously by Speedcafe.com.au, Garth Tander will team up with Cameron McConville in the #2 entry, with Will Davison sharing his #22 ride with David Reynolds.

Tander and Davison are the defending Phillip Island and Bathurst champions, although they have been forced to split this year due to V8’s new endurance driver rules.

At this stage, it is expected that McConville will remain with Tander at the new Armor All Gold Coast 600 twin-driver race, while Davison will be joined by Australian international Ryan Briscoe.

This will be the second time Tander and McConville have teamed together, having contested the 2004 enduros together when they drove for Garry Rogers Motorsport. The 2007 V8 champ says that McConville was his first choice.

“Cameron was the obvious choice to me, he’s a great guy, we have been team-mates and driven together [at GRM] before, and we have exactly the same seating position,” Tander said.

“He’s got a lot of experience and even though Cam’s retired from fulltime driving he has plenty of miles under his belt this year.

“Cameron finished second at Bathurst last year, so it’s a strong combination whenever you can pair the first and second place finishers together.”

“I’m ecstatic, to be driving with Garth and for the factory Toll Holden Racing Team is a wonderful opportunity and one I’m not taking lightly,” McConville said.

“Everything I have done this year has been in anticipation of the next three races, so I am really looking forward to making a solid contribution to the team’s success.

“Garth and I are great mates and I have good memories of us driving together in 2004. We finished fourth at Sandown that year and were on track for a podium at Bathurst until Garth was crashed out of the race, so it’s fair to say we’ve got unfinished business together.”

This will be McConville’s second enduro campaign with HRT. The 36 year old partnered Craig Lowndes in 1999, earning a pair of podium finishes – their second place finish at Mount Panorama securing Lowndes and HRT their third Australian Touring Car/V8 Supercars Championship. 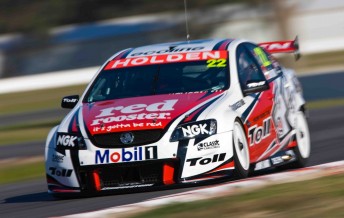 Will Davison will share his #22 car with David Reynolds

For the #22 car, Davison says that he has “nothing to lose” after a difficult season so far.

“With the way my season has played out I have absolutely nothing to lose and everything to gain, so we are going into full attack mode for the enduros,” Davison said.

“I’m rapt to have David driving the #22 Toll Commodore with me, he is seriously talented, fast and extremely motivated with a point to prove in V8 Supercars.

“We have been friends for a long time and this is a great opportunity for us both.

“I’ve told David not to worry about it being ‘my’ car, so we can just go for it – I’m pumped about our chances at Phillip Island.”

Reynolds, a former Formula Ford and Carrera Cup champion, is relishing the chance to drive for the factory Holden team.

“It is fair to say that opportunities to drive a red Commodore for the factory Toll Holden Racing Team don’t come along often in this business, so I am very, very excited,” Reynolds said.

“I have been working my whole career towards this opportunity and even though I have had a fair amount of downtime during the year I have been training as hard as I possibly could, and I am fitter than I have ever been.

“Phillip Island is one of my favourite tracks, it’s the track I’ve had the most success on so I am very much looking forward to it – hopefully we’ll end up on the podium.”

The L&H 500 takes place at the Phillip Island Grand Prix Circuit over the September 10-12 weekend.