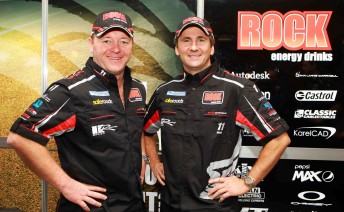 There’s lots to like about this entry – Seton’s return to Bathurst, experienced line-up, reliable car – although according to the experts, don’t look for them to threaten the outright contenders.

Between ‘Bargs’ and ‘Seto,’ the pair has racked up 39 Bathurst 1000 starts – equal to the Craig Lowndes/Mark Skaife combination.

Will experience see these guys pull off a podium, or maybe even Seton’s first Bathurst 1000 victory?

Seton has been out of the seat of a V8 Supercar since 2008, missing last year’s race. That may play a role, but according to the man himself, the fire still burns for that elusive Bathurst win.

For Bargwanna, top 10 speed has been hard to find this season, but that was the case last year as well while he was driving with Sprint Gas Racing. And if you remember, Bargwanna was on a podium run until a clash with three laps remaining.