Brad Jones Racing is in the final stages of constructing its brand-new Trading Post Racing Commodore VE as the V8 Supercars teams prepare to come out of the mid-season hibernation.

Bright will get his first taste of the new car this coming Monday at Winton Motor Raceway in a 20 lap shakedown before conducting a full test on Tuesday.

Bright’s endurance co-driver Matt Halliday will be present at the Winton test.

With the mid-season testing ban lifted next week, both the rural Victorian circuit and Queensland Raceway will be packed places. All of the V8 teams are getting in a last-minute pre-endurance test before the L&H 500 at Phillip Island (September 10-12) and the Supercheap Auto Bathurst 1000 (October 7-10). 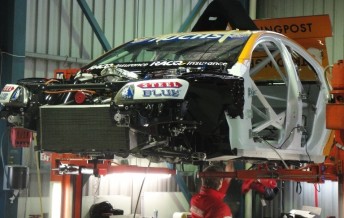 Almost done: The new Trading Post Commodore VE will be shaken down at Winton on Monday

Bright recently had a seat fitting in his new rig at the team’s Albury-base, and judging by his first impressions, he is all smiles.

“I had a sit in it, and by the feel of it, it has all come together well and looking great heading into the test,” he told Speedcafe.com.au.

“I haven’t had a new car for a few years too. It has made me pretty excited for the endurance races.”

Based on the last round at Townsville, Bright should be looking forward to the upcoming races. After a mediocre season, he turned it around with a pair of top 10 qualifying performances at the far north Queensland street circuit, and was on track for top 10 race results until two unrelated engine dramas put him out.

Those dramas aside, Bright is confident that the team’s new found form – and a shiny new car – will put the #14 car in with a strong chance.

“The way we’ve been going in the last couple of rounds, especially at Townsville, any small improvements we can get from this new car is a major bonus,” he said.

“The car has improved weight benefits and the ability for us to distribute the weight differently, so I’m sure that you’ll see a little bit more of a gain with it.

“Our cars are getting better all the time. Townsville was the first time that we’ve had both cars (team-mate Jason Richards) in the top 10 in qualifying, and both cars had pretty good race pace.

“The end result at Townsville was a bit of a disappointment with two engine problems, but I’d rather it happen there than in the next couple of races.”

Winton will be a busy place this Monday and Tuesday. Garry Rogers Motorsport will shakedown and test Lee Holdsworth’s new car on both days. Other teams doing back-to-back days include Centaur Racing, Brad Jones Racing and Bundaberg Red Racing.

Ford Performance Racing, Lucas Dumbrell Motorsport and Kelly Racing will only test on Monday, while the Holden Racing Team is only booked in to test on Tuesday.

SBR will head back to QR on Thursday for an evaluation day for international star David Brabham, testing the IRWIN Tools Racing Falcon FG.

How is your favourite team shaping up for the endurance races? CLICK HERE for the Castrol EDGE Endurance Countdown …