Who is the best Aussie Touring Car driver?

Who is the best Aussie Touring Car driver? The start of the 1984 ATCC at Sandown

Who is the best Australian Touring Car driver of all-time?

V8 Supercars Australia will endeavor to find the answer as the category celebrates the 50th anniversary of the Australian Touring Car Championship.

The top 50 Australian Touring Car drivers will be selected by an assembled panel of ex-drivers, journalists and industry members. The panel will then select the top 10 in order, with the remaining drivers not listed in order, simply given their due recognition.

The winner will be announced at the Norton 360 Challenge at Sandown Raceway on November 19-21. The criteria for the top 50 is not limited to the Australian Touring Car Championship – it includes every form of Australian touring car racing – from the ATCC, V8 Supercars, the Bathurst 1000, Sandown endurance races, Manufacturers Championships, Super Touring, Group A, Group C, Series Production and Improved Production.

The top 50 selected are not based solely on results. Drivers will be assessed on their contribution to 50 years of Touring Car, including on-track success, dealings with fans and media, versatility, longevity and a range of other factors.

While the finer details of the top 50 selection process are still being put together, coordinator Aaron Noonan told Speedcafe.com.au that the project is the best way to honour Australia’s great Touring Car stars.

“I think it’s a great thing to be doing, to tip our hat to how the category has got to where it has got to,” Noonan said. 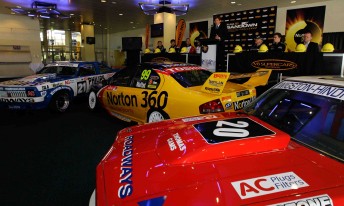 The launch of the Norton 360 Challenge at Sandown yesterday

“Quite often, people say that we’re a young sport. V8 Supercars is a young brand, but we’ve got 50 years of touring car history.

“The AFL and NRL have done their Team of the Century, so basically, this is V8’s way of celebrating the Touring Car Championship’s anniversary – the top 50 drivers of the past 50 years.”

Noonan predicts that the final 50 will create a bit of a stir in the public.

“One of the biggest questions is how many of the current drivers make the list. James Courtney currently leads the championship, but has he done enough over the past few years to justify his place in the 50? That will cause a lot of debate and a lot of passionate response.”