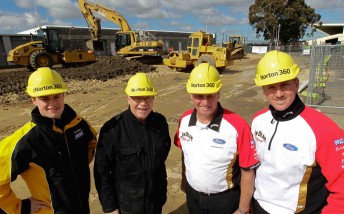 The big changes you’ll notice at Sandown Raceway is the flattening of the earth behind the pit facility, but there are other improvements that are equally as significant.

The pit structure itself, originally built in 1984, will remain largely unchanged, except that some of the concrete walls within the building have been removed. In the past, there were two and three car garages. When the pit improvements are completed in the coming months, all the garages (bar one) will be three car areas, which suit the structure of the modern V8 Supercars teams.

But it is the improvements around the track that will be of benefit to the entire Victorian and Australian racing community.

More than 25 safety changes will occur around the 3.1km track – from widening and deepening of tyre barriers, putting conveyer belt front on the tyre barriers, resurfacing a 1/6th of the track, removing old earth tyre barriers, improving run-off areas, plus other projects all to be finalised in next three years. 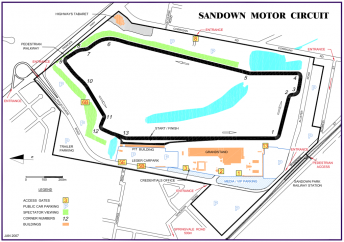 Some of these chances, to bring the circuit in line with current FIA standards, will be completed before this year’s Norton 360 V8 Challenge (November 19-21), but will all be finished by 2012.

It was announced today that V8 Supercars and the Melbourne Racing Club have agreed to a new 10-year deal, keeping the V8s competing at the oldest circuit on the Australian touring car calendar.

CLICK HERE for news on all of the announcements at Sandown today.

According to the Melbourne Racing Club Manager Wade Calderwood, the most significant safety change to the Sandown track will occur at the end of the Dandenong Road section.

“At turn 9 we’re going to improve the tyre wall with the heightening of the guard rail and additional tyre barriers,” he told Speedcafe.com.au.

“From the Paul Radisich experience at Bathurst in 2006, when the drivers walk our track and look at the safety, they’re always concerned about the highest speed run-off points of the track. We’ve made sure that we’ve put deeper tyre barriers at turn 9, and the same for turn 1.

“Turn 4, it’s a slow speed corner, but there’s been a lot of damage accumulated to the guard rail over the years, so that will all be replaced.

“We’re not actually changing the structure of the surface. The circuit will still be the 3.1km layout – the changes are all for safety reasons.”

Calderwood said that the funding for the upgrades is coming directly out of the MRC’s pocket.

“It’s a pretty significant investment by the club,” he said.

“We can’t do it all overnight. We don’t have the budgets of the state government funding it. It’s all coming out of our own back pocket.

“We’ve had to reach an agreement with V8 Supercars Australia that we’ll do these works ourselves, but we can’t provide the facilities like the category has at Bathurst or Yas Marina – we’re not in that league.

“We’re making sure it is safe, fit for the purpose and your average clients will have a great experience when you’re here.”

According to Calderwood, the changes to the track will not only profit V8 Supercars, but all forms of Australian motor sport.

“It’s not just V8 Supercars that will benefit from this. We have other motorsport and motoring clients like driver education, hot laps, even cyclists use this track – the track resurfacing that we do will benefit those guys,” he said.

“We see ourselves as an entertainment precinct. We look at it as a bigger picture project and therefore the investment is worth it.”