Sebastien Loeb in front in Germany

Sebastien Loeb in front in Germany 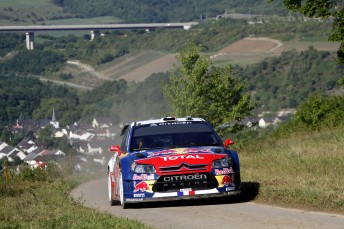 Sebastien Loeb is just 9.5-seconds in front in Germany

Defending six-time World Rally Champion Sebastien Loeb will take a 9.5-second lead into day two of Rallye Deutschland although the Citroen driver admits the gap might not be enough to keep team-mate Dani Sordo at bay.

The Spaniard was a consistent threat to Loeb through Friday’s six stages and went faster than the Frenchman on the final stage of the day, the repeat of the 19.92-kilometre Moselland test.

“It’s been a good day for sure but it’s not been easy and I have been really pushing because first Petter was fast and then it was Dani,” said Loeb.

“I have to continue this way tomorrow if I am to win.”

Sordo, back in the main Citroen team after contesting Rally Finland with the company’s Junior squad, said he had been full of confidence throughout the day.

“My times have been consistent and it’s nice to be close to Sebastien,” said Sordo.

“But the most important thing is to take as many points as possible for the manufacturers’ championship.”

Jari-Matti Latvala is the leading works Ford driver in third overall and was satisfied with the progress made since the last asphalt round in Bulgaria back in early July.

“I’ve made progress since Bulgaria and that is important,” said the Rally Finland winner.

“I’ve not made any major errors but the small ones have cost some time.”

With the anti-stall problem that slowed him during the morning resolved, Sebastien Ogier was able to climb ahead of Ford’s Mikko Hirvonen for fourth after going faster than the Finn on stage five. Ogier said he was satisfied with his performance but Hirvonen admitted that he needs to find more speed on day two.

Francois Duval completes the top six on his return to the WRC for the first time since 2008. The Belgian could have been higher up the leaderboard but for a broken front-right driveshaft five kilometres from the finish of stage two, which left his Focus on rear-wheel drive only.

“It’s good that this is a long rally as it can hopefully allow me to catch up on the others after a bad start,” said Duval, who lost almost a minute on Friday morning.

Matthew Wilson is seventh, 4.7s behind Duval, after overcoming understeer and brake problems earlier in the day.

Ex-Formula One world champion Kimi Raikkonen is eighth in his Citroen Junior Team C4 with Petter Solberg ninth after a fraught day. The Norwegian suffered a deflated tyre on the opening stage and in his efforts to make up the lost time he carried too much speed into a left-hander on stage six and broke his right-rear wheel rim against a kerb, which prompted a second wheel change.

“It’s been an up and down day,” said Solberg.

“The car has been very good and we showed our speed by going fastest on stage five. Unfortunately we overshot a junction on stage four and then had the problem with the wheel on stage six.”

Ken Block completes the top 10 in his Monster World Rally Team Focus on only his third asphalt rally and his first at world championship level.

The second leg is the longest and toughest of the rally.  It contains two passes over the 48.00km Panzerplatte in the daunting Baumholder military training area, the longest test of the season where a mixture of surfaces will test drivers to the maximum.  In contrast, they must also tackle fast, flowing and smooth woodland roads in Saarland.  Competitors face two identical loops of four stages covering 185.94km.