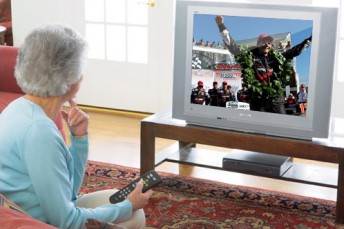 Can Will Power win at Sonoma?

With most motor sports series having a weekend off, the best of the LIVE action on Australian TV will be the Indycars at Sonoma in Northern California.

ESPN will show LIVE race coverage of the Indycars from Sonoma from 7am Monday morning. Will Power will once again be the driver to watch. The championship leader was involved in a nasty crash during practice for this race last year. He’s keen to put that behind him and stretch his points advantage at Infineon Raceway.

The World Rally Championship visits Germany this weekend. Citroen hero Sebastien Loeb has never been beaten on this event. Look out for the fast and flowing roads through the vineyards of Moselle near the Luxemburg border. Daily coverage can be seen on ONE HD.

Check out the action of one of the most spectacular races on the NASCAR circuit, Bristol Motor Speedway. Despite being a half-mile track, ‘Thunder Valley’ is like no other place. 175,000 fans pack into the stadium of speed for the IRWIN Tools Night Race. Look out for coverage on Foxsports plus ONE HD.

The V8XTRA Bathurst build-up continues this Saturday at midday with a special workshop feature presentation from Ford Performance Racing in front of a live and passionate audience. Drivers Mark Winterbottom, Steven Richards and Paul Dumbrell will join Neil Crompton, Mark Skaife and Mark Larkham. Larko takes viewers on a tour of the workshop and the FPR drivers take on a special Pit Stop & “Mountain” Challenge.

Continued LIVE coverage of the British Elite Speedway can be seen on Foxsports from 4.30am Tuesday morning.