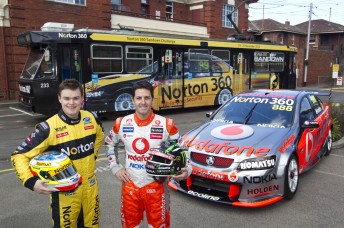 James Moffat and Jamie Whincup with the Norton tram

Melbourne motor sport fans might need to look twice at who is driving one of the most distinctive trams on the streets of the Victorian capital.

Internet security software provider Norton has wrapped one of Melbourne’s famous trams to look like Moffat’s Ford Falcon as part of promotions for the penultimate round of the V8 Supercar Series, the Norton 360 Sandown Challenge on 19-21 November.

Norton is also a major backer of the entries of Whincup and Craig Lowndes.

The distinctive tram was lined-up alongside one of the TeamVodafone Commodores at the Camberwell tram depot.

The comparison between the two machines might be closer than it seems. Whincup’s V8 Holden Commodore develops around 480kW, while the tram has four electric motors each developing 100kW.

Melbourne commuters should look out for the tram over the next month with Norton 360 grid girls onboard handing out scarves and free software (RRP $129.95).

Meanwhile race can meet Jamie Whincup at Southern Cross station on Friday the 27 August between 4-6pm.