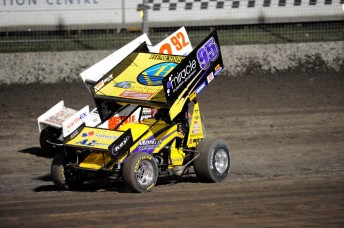 Ryan Farrell behind the wheel of the Monte Motorsport entry at the Perth Motorplex.

Western Australian Sprintcar livewire Ryan Farrell is set to light up speedways across the country this summer when he lines up for his second tilt at Australia’s most prestigious series.

Farrell, who finished fourth during his debut series last year, will once again be lining up in the 16-round World Series Sprintcars championship with the Monte Motorsport outfit.

Farrell stood on the podium four times, starting with a third in the opening bout in Brisbane and finishing with another third in the series final at the Perth Motorplex last season.  In between he claimed a pair of seconds at Mt Gambier and Kalgoorlie.

With last year’s performance exceeding the team’s goal of a top five series result Farrell is aiming higher for 2010/2011.

“The series was probably a bit tougher than I thought, not so much the racing as I have experienced the racing at that level for quite a number of years, but certainly with all the travel,” said Farrell.

“We were close to the front on most nights last year, but just had a couple of bad nights…you just have to be consistently at your best.”