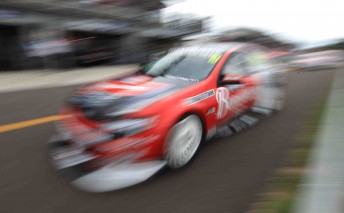 Andrew Thompson has endured a shocking start to the 2010 V8 Supercars season.

The 22-year-old was one of the hottest young properties back in 2006, driving for Dick Johnson Racing in the Fujitsu V8 Series. He won the final two rounds of that year and looked like he could take career into Whincup-land.

Since then, he has been in and out of different teams – in both the Fujitsu Series and the Main Series – and hasn’t been able to get a lucky break.

2010 was meant to be that year, linking up with Walkinshaw Racing’s crack Holden squad, but he has been plagued with mechanical unreliability and a couple of weekend-ending crashes.

For the enduros, Thompson is set to be joined by young Fujitsu star Nick Percat at Phillip Island, followed by Australian IndyCar driver Ryan Briscoe at Bathurst. Stay tuned to Speedcafe.com.au for official driver combinations.