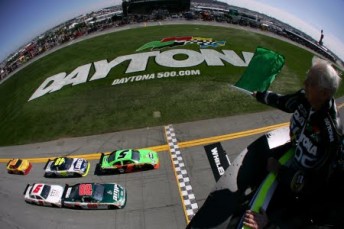 The 2011 NASCAR schedule will once again kick off at Daytona. Pic: Todd Warshaw/Getty Images for NASCAR

NASCAR has announced its schedule for its three national series’ during 2011 today.

Featuring 36 races, the schedule begins at Daytona in February and completed at the traditional season ending Ford Championship weekend at Homestead in Miami.

The NASCAR Sprint Cup schedule features two realigned events. A second Kansas date follows the Coca-Cola 600 at Charlotte and will be held on June 5.

It also sees for the first time a decade the Sprint Cup will visit a new track with Kentucky set to host a race on July 9.

In another slight change, the Chase starts on Sept. 18 at Chicago — NASCAR’s second largest market — and will lead to a big start to 10-race playoff system.

“The adjustments and realignment of the 2011 NASCAR Sprint Cup schedule will make for an exciting race season next year,” said NASCAR Chairman and CEO Brian France.

“The revised schedule provides better situated dates for the tracks, a more challenging lineup for the drivers and ultimately more intrigue for the fans.”

Note: one additional date to be added