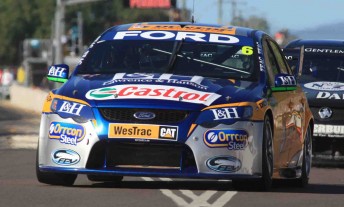 Steve Richards will share his #6 FPR Falcon with James Moffat

Two-time Bathurst winner Richards is one of the stalwarts of the V8 Supercars category, but a number of issues this season has affected his championship. Only a handful of top 10 results have been forthcoming, although a strong run in the last round at Townsville could propel him into a good endurance season.

One unknown for Richards is the endurance form of his team-mate Moffat. The rookie will compete in his first V8 Supercars Championship Series races, and while he has also had a difficult season in the Fujitsu V8 Series, this pair can’t be written off.

And for those with a nostalgic bone, this year is the 40th year since James’ dad Allan Moffat’s first Bathurst 1000 win …

But what does Noonan and Perkins think of this entry’s chances? Check out today’s edition of the Castrol EDGE Endurance Countdown – only on Speedcafe.com.au