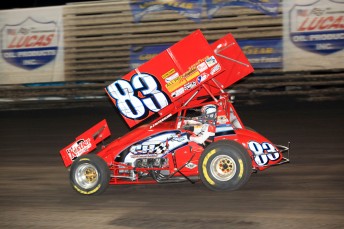 Tim Shaffer on his way to victory in the 2010 Knoxville Nationals. Pic: Paul Carruthers

In a race that will go down as one of the most dramatic in the history of the event, and the famous Knoxville Raceway, Shaffer crossed the line first to claim the $150,000 winners cheque ahead of Donny Schatz.

Outside front-row starter Sammy Swindell grabbed the early lead from polesitter Brian Brown on the first lap. Brown stayed with the 1983 Nationals champion though and the pair nearly came together as they crossed the line at lap three.

When Joey Saldana’s machine went up in a puff of smoke on lap seven it brought out the first caution period of the race, just as the the lead pair was just about to come to traffic.

Four-time and defending Knoxville champion relegated Brown to third on the restart before setting his sights on the Big Game Treestands #1 entry.

While Swindell and Schatz were dicing it out for the lead 12-time Nationals Champion Steve Kinser had found his way into third spot.

Following the competition caution that came at the halfway point of the 50 lap event, allowing the crews five minutes to change anything they wanted on their cars – most changed rear tyres and refueled, Swindell and Schatz resumed their battle at the front. 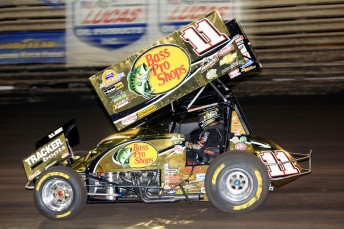 Steve Kinser was running strongly until his race went up in smoke on lap 31. Pic: Paul Carruthers

Just as it appeared as though he would be able to mount a challenge Kinser’s race went up on smoke on lap 31 and he pulled off the circuit.

Schatz tried a slide job for the lead through turn four on lap 34, but jumped the cushion and lost momentum allowing Swindell back into the lead.

Just as intense as the battle for the lead was the challenges for the minor positions between Shaffer and Brown. The two waged a torrid battle until Brown’s right-rear tire blew and the yellow flag came out at lap 44.

Schatz shocked Swindell on the restart with a big slide job in turn three to take the lead on lap 45 and the pair raced side by side all the way around, with Swindell in the lead the next time. Schatz tried a slide job again in turn four and jumped the cushion.

With only three laps remaining, it looked like Swindell might end a 27-year Nationals drought. But his left-rear tyre blew in turn four and he flipped over backwards to bring out the only red flag of the race.

That gave Schatz the lead for the restart but his Armor All/STP machine began to smoke allowing Shaffer to close in on the lead. Shaffer used a slide job, took the lead on the white-flag lap and sped away to claim a popular victory.

“The feeling I am having at the moment is incredible, it’s very hard to explain,” said Shaffer.

“To be up here (on top of the podium at Knoxville) is a dream that I never thought would come close to being true.

“During the yellow in the middle of the race we changed the tyres because I felt as though we were slipping around out there. It kept doing the same after the yellow but then it kept coming in and coming in.

“I was a bit scared that I was going to get mixed up with Sammy in his crash. Then when I was second at the restart I gave it everything I had and it ended up being good enough.” 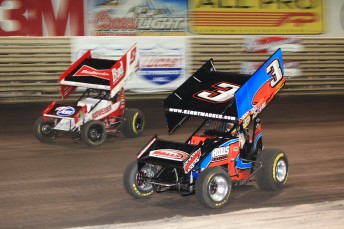 Schatz held on for second while third place went to Shane Stewart ahead of Craig Dollanksy, who started from 24th place after transferring from the B-Main, and Australian Kerry Madsen. It is believed that Madsen’s fifth placing is the highest by an Australian driver in the prestigious event.

Of the remaining Australian contingent both Lynton Jeffrey and Skip Jackson made the A-Main but failed to finish, Ian Madsen crossed the line eighth in the B-Main while Brooke Tatnell crashed out of the C-Main.

South Australian Trevor Green, Max Dumesny and Jamie Veal all finished well back in the C-Main while Mitchell Dumesny finished fourth in the D-Main and Domain Ramsey and Bruce White contested the E-Main.