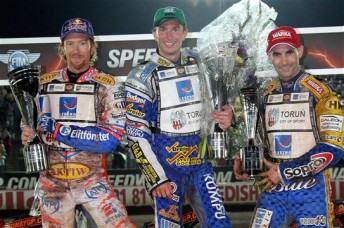 Rune Holta took out the Scandinavian Speedway Grand Prix ahead of Jason Crump (left) and Tomasz Gollob (right) in Sweden.

Polish international Rune Holta says he has the experience to realise his World Championship medal dream after winning the FIM Scandinavian Speedway Grand Prix in Malilla, Sweden, on Saturday.

Holta considered retiring from the Grand Prix series over the winter, after becoming frustrated at years of just scraping into the top eight.

But his 20-point haul at the G&B Arena has fired him up to fourth in the World Championship on 76 points.

This leaves him 14 adrift of Crump in third place. While the Aussie could take some catching, Holta is certain he has the experience now to win a spot on the series rostrum at Bydgoszcz on October 9.

“My goal has always been a medal. But I’ll take it one meeting at a time. If I keep up the same form as I produced last year, it will be good,” said Holta.

“Top three would be a fantastic result for me. It looks good now. It’s all about experience and getting more experience.

“Maybe I’ve got there a little bit late because I haven’t done the British league like the rest of the guys. But now I’m starting to get the meetings I need to win something.

“I’m getting really focused and I know how to set up the bikes. I’m taking points at different tracks and it’s all coming to me now.”