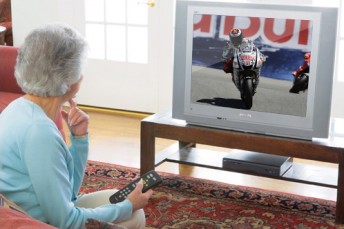 Jorge Lorenzo will be the one to watch at Brno

With the mid-season break in V8 Supercars and Formula One in full swing, this weekend’s LIVE racing action centres around the Czech MotoGP.

After racing a couple of weeks ago in Northern California, the MotoGP Series returns to Eastern Europe this weekend at Brno. The likes of Casey Stoner, Jorge Lorenzo and Valentino Rossi as well as all three classes will be on track; with extensive coverage on ONE HD. MotoGP qualifying can be seen on Saturday evening, with LIVE race action getting underway with the 125cc class from 6.45pm on Sunday night on ONE HD. This will be followed LIVE on ONE HD with Moto2 at 8pm and the big boys of MotoGP at 9.30pm.

Still on bikes and you can catch LIVE coverage of the British Elite Speedway at 4.30am Tuesday morning when Ipswich take on Swindon.

Nothing stops for NASCAR and after Marcos Ambrose victory and third place finish last weekend at Watkins Glen, the action switches to Michigan International Speedway. LIVE from 3am Sunday morning on ONE HD you can catch the CarMax 250 Nationwide race. LIVE from 2am Sunday morning tune into Foxsports for the Sprint Cup Carfax 400.

This weekend is the final race before the US National at Indianapolis. Final eliminations of the Lucas Oil NHRA Nationals from Brainerd (Minnesota) can be seen on ESPN from 3.30pm Monday afternoon.

A special V8Xtra presentation this Saturday at midday on Seven with an Allan Moffat Insight. V8Xtra continues the countdown to the Supercheap Auto Bathurst 1000 reliving moments of the Great Race with one of the most successful drivers to tackle Mt Panorama – Allan Moffat. The show also contains some wonderful old video of rarely seen special moments of the Bathurst race from the Seven Sport archives.