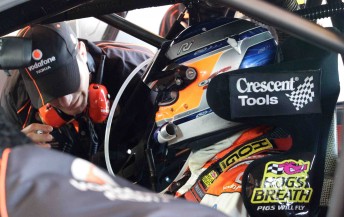 Steve Owen’s Fujitsu V8 Supercars Series Holden Commodore VE entry will receive a make-over for the next round of the series at Bathurst (October 7-10).

The Greg Murphy Racing Commodore will get the ‘Triple Eight’ treatment before the meeting in an effort to make it as similar as possible to the #1 TeamVodafone Commodore VE that he’ll share with Jamie Whincup in the V8 endurance races at Phillip Island, Bathurst and the Gold Coast.

Owen, a comfortable 204 points ahead of Tim Blanchard in the Fujitsu Series, said that the changes should help him adapt quicker to Whincup’s Commodore.

“What we’re going to do is try and make my Fujitsu car a little similar to how the #1 car is,” he told Speedcafe.com.au.

“In the Murphy car, they’re running a different brake package, so we’re going to revert to what Jamie has been running so it is easier for me to jump from one to another.

“When I did both series in 2008, my Fujitsu car had a H-pattern gearbox, and the DJR had sequential. They were worlds apart, but by doing the races, it still helped quite a bit. If we can make the two cars similar, I’ll be in a much better position.”

For more with Owen, CLICK HERE for his interview in this week’s Café Chat.

And for more on the V8 Supercars endurance races, CLICK HERE for the Castrol EDGE Endurance Countdown – updated everyday – exclusive to Speedcafe.com.au.