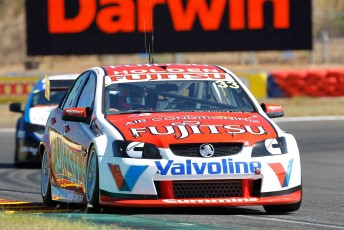 Is this combination the biggest dark horse in the field?

It’s hard to call them a ‘dark horse’ or a ‘smokey,’ considering that the Fujitsu Racing cars are never too far away from the front, but compared to some of the heavy-hitting teams, this one always seems to fly under the radar.

Holdsworth is currently seventh in the championship, a long way off the lead, so winning the title this year is unrealistic, which will allow him to focus solely on results, rather than his series hopes.

His team-mate David Besnard is a proven performer, with two podium finishes in 2007 and 2008, and if Safety Cars had fallen his way last year, he could have won the Bathurst 1000 …

And don’t forget, this entry will have a brand-new chassis for the V8 endurance races. CLICK HERE for Speedcafe.com.au’s latest news story.