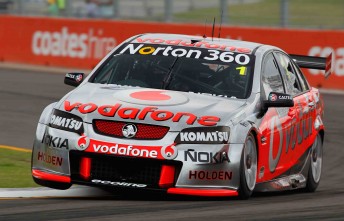 The #1 TeamVodafone Commodore, to be driven by Jamie Whincup and Steve Owen

Whincup has won The Great Race three times, but has enjoyed all of that success with Craig Lowndes. Due to V8’s new co-driver rules this year, Whincup and Lowndes can’t drive together. Can Whincup win without his mate? And is Owen the right team-mate choice for Whincup? Remember, Whincup isn’t just one of the enduro favourites, he’s also in contention for the V8 Supercars title …

See below for the first in a series of 30 videos – the Castrol EDGE Endurance Countdown – exclusive to Speedcafe.com.au.