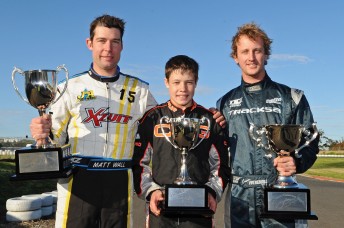 Matthew Wall, Cian Fothergill and Pierce Lehane etched their names in Australian karting history during the final round of the 2010 CIK Stars of Karting Series in Melbourne across the weekend.

Wall, who finished second behind series debutant David Sera in yesterday’s final, entered this weekend 12 points adrift of championship leader Kel Treseder but a strong run on his home circuit saw him finish six points clear at the top of the standings.

“This is simply an amazing feeling,” said an emotional Wall.

“I’m now 32 years old, so my time at the top of the sport is possibly running out and this championship is something that I wanted more than anything.

“The Pro Gearbox category and the CIK Stars of Karting Series this year has been great, we’ve got the best drivers racing against each other. So when you win a round, or a championship you certainly earn it.”

Courtesy of his victory Wall claimed the John Pizarro trophy and will now line up on the grid at the SuperNats, one of the world’s biggest karting events, in Las Vegas during November.

All throughout the weekend Treseder failed to make an impact on the front-runners and as a result finished seventh in the final race.

Local driver Troy Woolston finished third in the Pro Gearbox championship while a victory in yesterday’s opening race and third in the second 26-lap encounter was enough for Greensborough’s Jordie Lindstrom the Victorian State Championship. 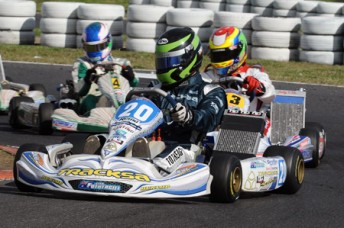 Cian Fothergill on his way to claiming the Pro Light Championship. Pic: photowagon.com.au

Cian Fothergill has been the dominant driver in the Pro Light (KF1) division winning five of the eight main events contested throughout the 2010 series.

This weekend Fothergill was outpaced by local driver Adam Hughes who was making his debut in the series aboard a Kosmic kart, but it was the bigger picture that Fothergill had his sights on.

Fothergill finished 50 points clear of defending champion Hayden McBride a top of the championship standings to add his name to the James Courtney trophy. As a part of his prize for winning his first CIK Stars of Karting title Fothergill will compete at the Asia Pacific Championships at Suzuka in Japan next year.

Three drivers were separated by a mere two points at the completion of the four-round series in third, fourth and fifth place on the standings with Joel and Grant Smith finishing equal third. Damien Radosevic claimed fifth place overall.

Lehane signed off his 2010 campaign the same way he started it – with a victory.

When the CRG driver crossed the line second behind Aidan Wright in the opening final of the day Lehane had an unassailable lead in the chase for the title and the Jon Targett trophy. 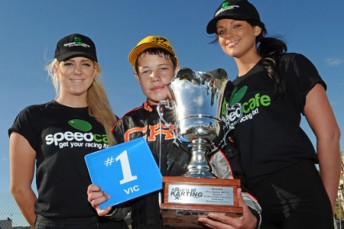 Pierce Lehane had a successful day winning the round, the Victorian Championship and the Pro Junior title. Pic: photowagon.com.au

Lehane went on to sign off his 2010 campaign in style with a strong performance to claim the victory in the final race ahead of Wright and James Macken.

The Sydneysider’s name will now sit alongside the likes of Ryan Briscoe, Michael Caruso and Andrew Thompson on the Jon Targett trophy.

Jason Hryniuk and Mitchell Gee were took out the East Coast Titles in the Clubman and Junior National categories after both finishing third at the weekend.