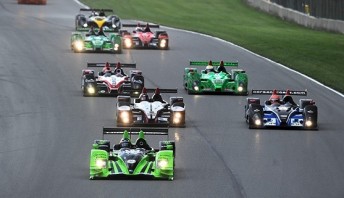 With three events remaining in the American Le Mans Series (ALMS), David Brabham is on track to win back-to-back titles.

“Second is good for us because it is a big points haul which will help us a lot in the championship,” said Brabham.

“Simon (Pagenaud) really did a fantastic job at the end of the race.

“At the start the track was changing so much and the gap was coming backwards and forwards all the time.

“We had a great pitstop and jumped the Dyson car and Simon was really on it at the end but they had too much power for us on the straights.

“That made it very difficult to pass around here but Simon and the entire Patrón Highcroft Racing crew really did an outstanding job.

“It has been a good day overall.”

The team was able to make a significant improvement to its lead in the Championship after the second-placed CytoSport Porsche was forced to withdraw from the weekend’s race following a pre-race accident.

The team will now tackle back-to-back races at Road America, Wisconsin, on August 22 and at Canada’s Mosport International Raceway on August 29.

Following the Canadian event Brabham will fly directly to the Gold Coast to test with IRWIN Racing ahead of September’s L&H Phillip Island 500.

Brabham will co-drive the IRWIN Ford Falcon with regular driver Alex Davison at the L&H 500 at Phillip Island, the Supercheap Auto Bathurst 1000 and the Armor All Gold Coast 600.