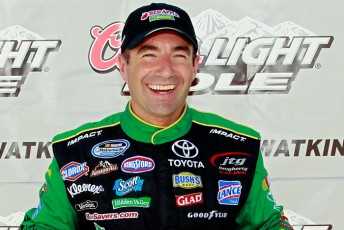 Ambrose qualified on pole position earlier in the day and dominated the race. A mid-race challenge from the Joe Gibbs Racing cars of Joey Logano and Kyle Busch was never a huge threat to Ambrose, who was able to pull away with superior pace.

Ambrose’s ability control the race from the front paid off when a 10-car pile-up removed many contenders in the first third of the race, when contact between Jason Leffler and Colin Braun exiting Turn 1 sent cars flying and blocked the track, causing a red flag stoppage of almost half an hour.

Earlier in the day Ambrose qualified in 11th position for the Sprint Cup race at Watkins Glen on Sunday US time/Monday morning Australian time, with Carl Edwards qualifying in pole position.

Ambrose now has a third opportunity to become the first driver to sweep both the Nationwide and Sprint Cup races at Watkins Glen tomorrow, but admitted that he can not pin point exactly why he excels at The Glen.

“I wish I knew, I’d bottle it up and take it with me everywhere I went,” said Ambrose.

“I’ve got no idea.  I’ve just grown up road racing, especially these heavy cars.  I seem to feel comfortable with them sliding around on these road courses.

“I’ve just got a great crew, great set-up and we’ve managed to make the most of it.  This win this year was probably our most dominant and I’m just really proud.

“We’ve been through a tough patch here at JTG.  It hasn’t been the year we all wanted.  It’s just great to get ‘em to victory lane to make it feel right.”