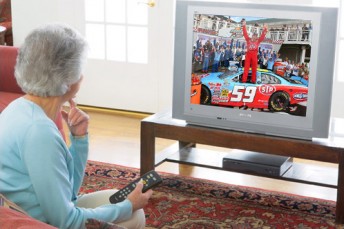 Ambrose is the defending two-time champion of the Nationwide Zippo 200. You can catch same day coverage of this race on ONE HD at midday Sunday. Ambrose will then jump aboard his Sprint Cup Toyota for the Heluva Good! Sour Cream Dips at the Glen LIVE on Foxsports from 2am Monday morning. Also look out for qualifying and Happy Hour coverage on ONE HD.

LIVE on ESPN from 4.30am Monday morning Aussies Will Power and Ryan Briscoe will take to the Road Course at Mid Ohio for the next round of the Indycar Series. Power extended his lead in the series at the recent race in Edmonton; can he take the top step again?

James Davison will also be in action at Watkins Glen, not in NASCAR but the Rolex Grand Am Series. Tune-in 1.15am Monday morning on ONE HD for all the action. Speaking of action the next round of the Red Bull Air Race Series from Germany will be LIVE on ONE HD from 10pm Sunday evening. For rally fans follow this weekend’s Portuguese round of the Intercontinental Rally Challenge on Eurosport.

The focus is on the UK this weekend for the next round of the British Superbike Series. Catch LIVE race action on Eurosport from 10.15pm Sunday night. For the Speedway fans tune-in LIVE to Foxsports on Tuesday morning at 4.30am for British Elite Speedway with Somerset taking on Glasgow.

Be sure to watch the Seven Network this Saturday at midday for an episode of V8 Supercars magazine program V8XTRA filmed from Kelly Racing’s headquarters in front of an audience of the team’s fans. Hosts Neil Crompton, Mark Skaife and Mark Larkham will take you behind the scenes at Kelly Racing’s impressive facility and speak with drivers Todd Kelly, Rick Kelly and Jason Bargwanna.