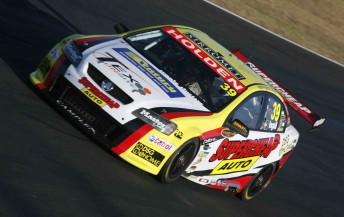 Former V8 Supercars driver and team owner John Faulkner says that he regrets quitting driving as early as he did after testing a Paul Morris Motorsport Commodore VE recently.

The New Zealand-born driver, who started his Australian circuit racing career in touring cars before turning his hand to AUSCAR, NASCAR and ultimately V8 Supercars, left the driver’s seat at the end of 2002.

He told Speedcafe.com.au that because he quit so early, he missed a lot of the modern technology that has come into the category.

“I recently had a test drive of (Russell) Ingall’s new car, the sequential gear box, the power steering, it was beautiful, a beautiful thing to drive,” said Faulkner.

“I did a few laps and I felt right at home. I always suffered with an arm injury from karting so the old six-speed Hollinger with straight cut gearbox was very hard on it.

“My only regret really is finishing up one year too early. I missed out on the technology that’s available now, the speed of the car, the soft tyres, that type of thing.”

For more with ‘JF,’ CLICK HERE for today’s edition of ‘Where are they Now?’ – only on Speedcafe.com.au