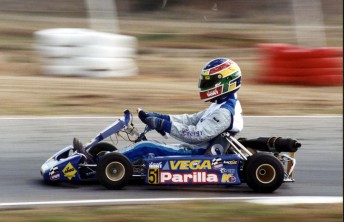 Josh Hunt on his way to victory in the Intercontinental A Championship during 2001.

Former CIK Stars of Karting Series Champion Josh Hunt will make a return to the series in Melbourne this weekend.

Hunt, who was crowned champion of the Intercontinental A category in 2001, will line up alongside defending CIK Stars of Karting Series Champion Hayden McBride and Peter Hollings aboard a Gillard chassis in the Pro Light (KF1) category.

“The opportunity really came out of the blue from Paul Gallo (Gillard Karts importer) but I jumped at the chance to get back behind the wheel of a kart again,” said Hunt.

“I’m really looking forward to getting back into the sport that I love.  I haven’t done a lot of racing in cars over the past few years and even when I have raced you don’t seem to get the close, side by side racing that you do in karting – which is what I love most.

“To be able to jump back in at the top level is amazing and I’d really like to thank Paul and the boys at Gillard karts for the opportunity.”

Hunt’s last major karting event came in 2003 when he contested the Stars of Karting (America) Nationals in California.  Since then he has competed in a variety of forms of motorsport including the Toyota Atlantic Series in America during 2004.

“While I have been out of the seat for quite a few years I’m fortunate enough to be jumping back in with the defending championship-wining team and driver which should help me a lot,” said Hunt.

“Hayden has just returned from a trip overseas where he raced in Germany so he’ll definitely have his eye in and I’ll be feeding as much as I can off of him.”

Hunt will take to the track aboard his Rockstar Energy Drink-backed Gillard kart for the first time on Saturday morning at the Port Melbourne Karting complex.

Also lining up for this weekend’s finale in the Pro Light (KF1) category will be 2002 Intercontinental A Champion Luke May.

Entering the final round of the series it is Queenslander Cian Fothergill who looks likely to claim the Pro Light (KF1) crown and etch his name on the James Courtney trophy awarded to the winner of the category.

After winning five of the six finals already contested this year Fothergill holds a commanding 39-point lead over McBride in the standings.  The battle for third place in the series will be intense with the next five drivers covered by a mere 20 points.