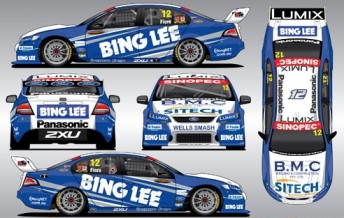 Bing Lee will be represented predominantly on the doors of Dean Fiore’s Ford Falcon FG, with further signage on the boot and at either end of the front bar.

Bing Lee and Panasonic have backed Fiore on and off for the past 12 months and will occupy the majority of the real estate on the car for the remainder of the season. The scheme is likely to change though, depending on both companies’ promotion and business activities from state-to-state. 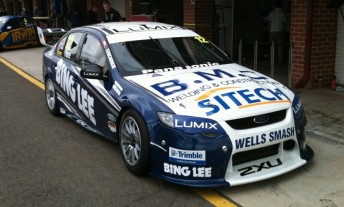 The Triple F Falcon has appeared with a number of different major sponsors this season, and Fiore said he is glad to have a deal locked away.

“It is a big weight off my shoulders to have the majority of the car sorted for the rest of the Championship,” he said.

“I am working hard and focusing on filling the remaining space for the rest of the season. I have been busy catching up with all our existing partners during the break to ensure their involvement continues to develop and work for them moving forward.”

Fiore will be partnered by Michael Patrizi in the next two rounds of the V8 Supercars Championship Series – the L&H 500 at Phillip Island (September 10-12) and the Supercheap Auto Bathurst 1000 (October 7-10).