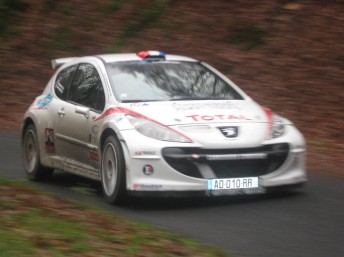 The four-time ARC winners wrapped up the Australian title at the Rally of Queensland on the weekend, and it is believed that the husband and wife combination could campaign a Peugeot 207 Super 2000 car in the upcoming Czech Republic round.

Evans tested a Peugeot in France late last year and has remained in touch with the Australian-arm of the French maker ever since. He told Speedcafe.com.au that he would love the opportunity to sink his teeth into the popular IRC title.

“We are pretty close to getting a deal to go back to Europe and compete with Peugeot,” he said.

“However, I’m under no illusion that I still have to prove my worth no matter what opportunity I get presented.

“Currently the IRC seems to be the championship to be in when you look at spectator numbers, quality of events and manufacturer interest.

“So obviously that’s the place we would like to go and most importantly both Sue and I believe we are up for the challenge.”

For more with Evans, CLICK HERE for today’s Café Chat