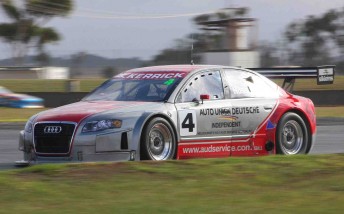 Darren Hossack will be the busiest racer at the Morgan Park Raceway round of the Shannons Nationals on August 14-15, competing in both the Kerrick Sports Sedan Series and the Rockpress Australian Superkart Championships.

Hossack, who claimed his maiden Clem Smith Cup victory from his last race start aboard the John Gourlay owned Audi A4 Sports Sedan, is on the verge of repeating his double national championship victory from 2008.

In the Kerrick Sports Sedans, Hossack is a runaway series leader after two of the five scheduled rounds, holding a 26 point advantage over Mazda RX7 driver Trent Young, who heads Bob McLoughlin, Kerry Bailey and James Sera in the series standings. 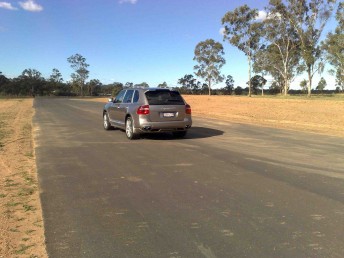 The second and final round of the Australian Superkart Championship meanwhile is set up to be a winner takes all battle, with Hossack trailing Gary Pegoraro by five points, following on from the Phillip Island event in May.

Qualifying will be all important, with a total of 44 karts entered for the meeting.

“I’ve studied a lot of footage on YouTube, and without the extensions it probably wouldn’t have been the best track for the Sports Sedan, but with the changes it should be very exciting.

“With or without the changes, Morgan Park would be a fun track in a Superkart.

“It’s been a long time since everyone has gone to a new track, so from that standpoint it will be a level playing field for everyone.

“After battling with James Sera (Saab Sports Sedan) at Mallala, I probably had the upper hand because of my previous experience around there, so I’m expecting him to really be on the pace.

“By running two classes my attention is definitely going to be divided, which isn’t going to be ideal, but by Sunday evening I should know the place better than anyone.

“With the Superkart we basically have a brand new chassis and motor combination that should provide us with better handling and power; we’re really chasing the win.

“Now that we’re starting to think about the Sports Sedan championship as well, we will still be going for the win, but just not taking any unnecessary risks.

“I think traffic could be a big issue in qualifying in both classes, where you qualify could have a big impact on the final result.”

The meeting will be the first to be held on the newly extended circuit, which is currently receiving the finishing touches that will see the circuit extended from 2.1 to 3km in length.

The first time any competitor has driven on the circuit in race conditions will be during Friday morning opening practice.