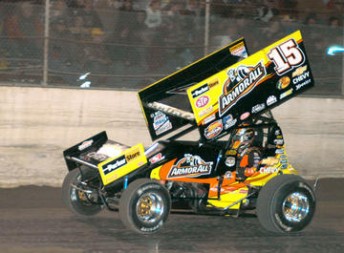 With only two victories to his name in 2010 four-time World of Outlaws Champion Donny Schatz was delighted to be back in victory lane following the rain-delayed Six Nation Showdown at Ohsweken Speedway in Canada on Sunday night.

Schatz started on the pole and gunned to an early lead over his Tony Stewart Racing team-mate, 20-time series champion Steve Kinser.  He was out front for four double file restarts, with Kinser lined up to the outside of him each and every time.  The Armor All/STP pilot used four strong restarts to power his way into turns one and two and stay out front.

Schatz set a blistering pace in the 30-lapper, finding himself in lapped traffic for a majority of the contest. Such was his speed that he lapped all the way up to the 14th-place finisher.

The win was the third of the season for Schatz and the 103rd of his World of Outlaws career. He is currently four wins behind Hall of Famer Doug Wolfgang who is fourth on the all-time list.

“It feels good to be back in Victory Lane,” said Schatz.

“I guess if you keep knocking on the door long enough somebody is going to let you in. It’s kind of how I feel right now. We had an awesome car and we’ve always been pretty good here.

“We learned something in the dash tonight about this place and about our car in general and were really excited about that. It didn’t feel the greatest in the car inside, but it would turn under guys and it’s great to have that. We’re pretty pumped.”

Joey Saldana, the current World of Outlaws point leader, finished second to earn his second straight Top-Five at Ohsweken Speedway in the Budweiser Maxim. He started third and ran in that spot for most of the race as he did all he could to track down Kinser and Schatz, who were ahead of him.

Kinser ended up third in the Bass Pro Shops Maxim to earn his series leading 29th Top-Five and 41st Top-10 finish of the season. He began the night by qualifying in the third spot to gain three bonus points in the standings and now trails Saldana by just 30 markers as he chases his record 21st title.