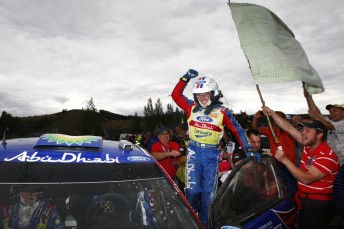 Co-driven by Miikka Anttila, Latvala took the lead on stage seven and drove without error to land his second win of the season. He showed outstanding maturity to withstand late pressure from factory Citroen pilot Sebastien Ogier to secure an emotional home victory.

“It’s amazing to win my home rally and it’s something I have dreamed of since I was a small boy,” said Latvala.

“The first time I watched this rally was in 1992 when I was seven and the only thing I could think about then was that I would never be able to drive as fast as the stars I was watching.

“In 2003 I drove this rally for the first time and still I never thought I would win.  To win in front of my home fans, in a country where rallying means so much to everyone, is a dream.

“It’s a hugely important victory for the team and Ford.  It was only during the final two stages that I really thought I could do it.

“I’ve learned that if you relax and make no mistakes then you can have a good rally.  There have been so many people watching and it was a fantastic atmosphere – this is the best rally in the world.”

Ogier, competing in Finland for only the third time was delighted with his second place finish on his first event with the leading Citroen squad.

Sebastien Loeb did his bid for a seventh world title the power of good with third place in his C4. The French driver struggled on Friday morning when the loss of his car’s front splitter caused a handling imbalance. He was also slowed by running first on the road on day one.

“Third place is not what we prefer but I did not come here especially for the win,” said Loeb.

“It’s not my rally I know because it’s difficult for me and third place for the championship is not so bad.”

Petter Solberg lost out on a podium finish by 4.7s and said he could not have gone any faster in his privateer Citroen.

Matthew Wilson completed the top six in his Stobart M-Sport Focus, despite a late charge by Mads Ostberg, who fought his way back up to seventh in his ageing Subaru Impreza, following a delay on Friday when he broke his car’s front-right wheel on a heavy landing. At the finish, Ostberg said it had been his best ever rally.

Kimi Raikkonen had his hopes of a top-10 result end up in a ditch on just the first stage of the day – the 2007 F1 World Champion completed the event in 25th place.

The championship returns to asphalt next month when drivers tackle vineyard tracks and military roads in Rallye Deutschland.  The rally is based in Trier on 19 – 22 August.

WRC Drivers standings after 8 of 13 rounds

WRC  Manufacturers standings after 8 of 13 rounds