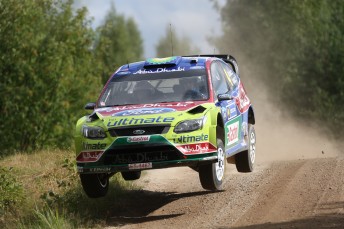 Ford’s Jari-Matti Latvala will start the final day of the 60th Neste Oil Rally Finland with a 9.1-second lead over Petter Solberg (Citroen) following a dramatic start to the event.

Starting his eighth home event, Latvala is yet to win and will have to withstand huge pressure from another driver looking to score his first victory in Finland, Solberg.

The Norwegian will have eight all-gravel stages on Saturday to overhaul Latvala, who will have to clear the road of the loose surface gravel by running at the head of the field.

“Running third on the road gave me a bit of an advantage today,” said Latvala.

“Maybe I took it too carefully at times but we’ll try to keep up this pace tomorrow.”

Latvala moved into the lead after going fastest through the first Sirkkamaki stage on Friday afternoon and has continued to edge clear in his works Ford Focus.

While Latvala celebrated a successful first day in Finland, his team-mate and countryman Mikko Hirvonen was left to reflect on what might have been after crashing out of first place in spectacular fashion on stage four.

“The dream is over and it’s just disappointing but at least we were on the pace before it happened,” said Hirvonen.

Dani Sordo completed the opening loop of stages in third place but slipped to fifth as fellow Citroen drivers Sebastien Ogier (third) and Sebastien Loeb (fourth) edged ahead, despite spending much of the day saddled by cleaning the road.

World championship leader Loeb’s fastest time through stage 10 was achieved at an average speed of 133kph, which is believed to be a Rally Finland record.

Matthew Wilson is sixth overnight in his Stobart M-Sport Ford Focus. The young Briton was caught up in heavy rain close to the end of stage seven and also reported a minor handling glitch in the afternoon.

Henning Solberg had climbed to fifth when he slid into a ditch on a left-hander on stage eight and rolled twice, coming to a rest upside down against a tree.

Four-time world champion Juha Kankkunen is up to seventh on his one-off return to the WRC. The 51-year-old is closely followed by ex-Formula One world champion Kimi Raikkonen, whom he vowed to try to beat before the start.

Mads Ostberg will start day two in touching distance of the top 10 as he continues to claw back time following his moment on stage five when a heavy landing on a rock broke his Subaru Impreza’s front-right wheel.

Abu Dhabi’s Khalid Al-Qassimi had been in the top 10 when he rolled into retirement on stage six. He was one of four drivers to crash on the Lankamaa test, which prompted organisers to award notional times to a number of competitors when the stage had to be halted.