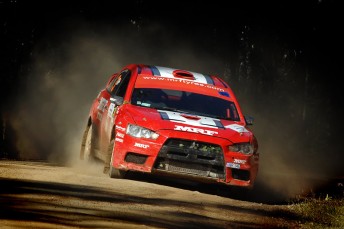 Australian star Chris Atkinson drowned his hopes of a major comeback victory in a creek and saw in-form Indian rival Guarav Gill race on to victory in heat one of the Asia Pacific Rally Championshup section of the international Rally of Queensland on the Sunshine Coast today.

Atkinson, driver for the factory-backed Proton R3 Malaysia team, led round four of the 2010 FIA Asia Pacific Rally Championship from the start last night at the Coates Hire Rally Shootout at Caloundra until the sixth of today’s eight forestry special stages.

Atkinson was leading by almost 49 seconds when his Proton Satria Neo S2000 plunged into a creek crossing on the 35 kilometre Big Gibber stage.

The engine stalled and could not be started, forcing Atkinson and Belgian co-driver Stephane Prevot to retire for the day.

That left Gill to inherit the lead in his Indian MRF Team Mitsubishi and steer to a heat victory by 4.8 seconds over Atkinson’s Scottish teammate Alister McRae.

McRae’s good result came in spite of three punctures, while Gill’s teammate Katsu Taguchi, the championship points leader from Japan, finished fifth after differential problems in the morning and a flat tyre this afternoon.

In the Australian Rally Championship section of the event, Victorian couple Simon and Sue Evans won every stage in their Subaru Impreza, finishing with a margin of more than three minutes and a strong probability that the finish at 3.30 pm tomorrow will see them crowned for a fourth time.

Atkinson’s mishap cost him the chance of not only his first Queensland victory since 2004 but also his first major international event. He had won the Asia Pacific Super 1600 Championship before graduating to the World Rally Championship with Subaru from 2005.

Tipped to be Australia’s first winner of a WRC round, matching the feats of Mark Webber in Formula 1 and Casey Stoner in MotoGP, Atkinson achieved podiums in Japan, Monte Carlo, Argentina and Mexico, but never the ultimate prize before Subaru withdrew from competition at the end of 2008.

This is the Queenslander’s comeback season after a frustrating year on the sidelines and to have his first win for Proton on his home event would have been a dream result.

“We just came into a creek reasonably quickly and 10 metres later we were stopped. I’m not sure of the exact problem,” said Atkinson.

“It’s really disappointing to have a big lead like that and lose it so quickly. There’s no real major damage to the car; the guys will have to look at it and make sure the engine is okay.

“That is really it for the rally, unfortunately. We can get some bonus points tomorrow, but we’ll just go out there and try to put on a show.”

The rally resumes with the first car on stage for heat two at 8.25am tomorrow. A virtual repeat of today, the cars will contest eight stages to complete a total competitive event distance of 268 kilometres.