If experience counts for anything, pencil in Jason Bargwanna and Glenn Seton as a threat in this year’s V8 Supercars endurance races at Phillip Island and Bathurst.

Seton will team up with Bargwanna in the #11 Rock Holden Commodore at the L&H 500 at Phillip Island and the Supercheap Auto Bathurst 1000.

The duo’s combined total of Bathurst 1000 starts is 39, equal to the #888 TeamVodafone pairing of Craig Lowndes and Mark Skaife.

Seton was announced as a part of Kelly Racing’s endurance driver line-up in May as the two-time Australian Touring Car Champion chases an elusive first Bathurst 1000 victory.

While the pair has never competed in the same V8 Supercar, or even the same team, they do have endurance race experience as part of the same team. Bargwanna and Seton both raced as part of the Pro-Duct operation at the Bathurst 12 Hour production car race in February, where Seton finished in second place. 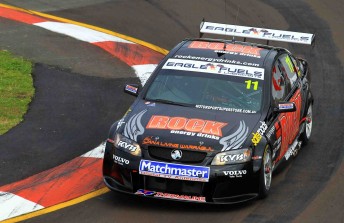 Seton says that a podium result is the pair’s aim for the two races.

“Jason (Bargwanna) spoke to me about what I was going to do this year because we were in the same team at the (Bathurst) 12 Hour earlier this year,” said Seton.

“So it’s great to get the opportunity to go there again for the 26th time at Bathurst and get to be a part of Jason’s show and go up there together.

“Jason drives like a little terrier dog and if he ever gets the chance he will be digging at their heels.

“I’m really looking forward to being a part of that and to get up on that podium is our aim.

“Having all those Bathurst starts makes both of us feel old – we’ll have to talk that down I think!”

Bargwanna, the 2000 Bathurst 1000 winner, said that with the addition of Seton, his entry’s speed and experience won’t be lacking at Phillip Island and Bathurst.

“Obviously this year, with not being able to pair up your number one drivers, it’s going to make the race very interesting,” said Bargwanna.

“Last year I had Mark Noske in my car and we were fighting for a podium position.

“I think this year with Glenn with me in the Rock car, there is no doubt that with the experience we have between us, we are in with a good shot.

“When you look at the amount of podiums that Glenn has had at Bathurst, it shows what he is capable of there.

“We teamed up together at the (Bathurst) 12 Hour in separate cars but in the same team earlier this year.

“I chased him around the Mountain and I can tell you that he knows the place better than most and that’s the bloke you need in your car.”