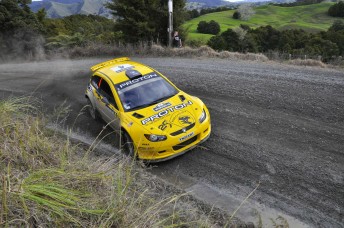 Chris Atkinson will lead a determined Proton Rally Team at this weekend’s International Rally of Queensland on the Sunshine Coast.

Atkinson and Perth-based Scot Alister McRae will steer Satria Neo S2000s in the Asia Pacific Rally Championship (APRC) section of their home event. At the preceding round at the International Rally of Whangarei (New Zealand), McRae finished second in the APRC while Atkinson’s run was interrupted with mechanical issues.

2010 has been one of promise for the Satria Neo S2000, but engine dramas have been the major issue. Both cars were shipped from New Zealand to Australia while the team members headed back to the UK to embark on an exhausting test schedule. The test Satria clocked up in excess of 1,000 kilometres while developing the car ahead of the fourth round of the series.

“All of that time, the engineers have been replicating the conditions in which we have suffered failures: over-revving the engine on downshifts, sitting the engine on the rev limiter for long periods of time,” said Team Principal Chris Mellors.

“Believe me, it hurts to do this kind of thing and it sounds horribly painful for the car, but the engine has withstood everything we could throw at it. But now it’s time for the big test, the next event.

“We’re all feeling confident in the progress we have made and we’re feeling very happy about the next rally, not least because it’s Chris’s home event.

“Of course, going to a driver’s home event does add some more pressure, but at the same time it’s going to help us to have a driver who knows their way around. Queensland is not an event we or Alister [McRae] have done before, so Chris’s knowledge of the rally, the surface, the type of stages and that kind of thing is going to help us tremendously.”

Atkinson has not competed in top level rallying in Australia since the 2006 Rally Australia in Perth.

“I’ve won this rally before and I want to do that again this week,” said Atkinson.

“Queensland is my home event, but it’s just another rally as far as I’m concerned and another rally I’m determined to do well on.

“The priority for us has to be to land some big Asia Pacific [Rally Championship] points, that’s the first objective. I think we saw on the last round just how much potential the car has got and, after three weeks’ of solid hard work from the team back in the UK, I expect we will be able to unlock some more of that potential in Australia.

“The one thing we know for sure is that it’s going to be another big fight. As well as the APRC guys, there are going to be some quick local guys down there as well.”

Having demonstrated the huge potential of both himself and the Satria Neo S2000, by setting fastest times in the APRC, since signing for PROTON at the start of the season, Atkinson is keen to give his home fans plenty to cheer when he starts the first stage next Friday (July 30) night.

The drivers are both in Australia and will test their Satria Neo S2000s, which have been fitted with upgrades since the last event, tomorrow.

Tickets and events guides can be found at http://www.rallyqueensland.com.au/

Check out the sight and sound of the Proton of Chris Atkinson in New Zealand.