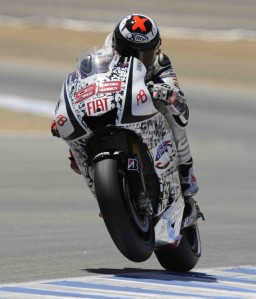 Fiat Yamaha rider Jorge Lorenzo has taken another MotoGP victory, although he didn’t have it all his own way at Laguna Seca in the Red Bull U.S. Grand Prix.

Repsol Honda’s Dani Pedrosa made one of his trademark lightening starts, and the Spaniard appeared to be making a similar break for victory as he had done in the previous round.

Pedrosa’s race came to a crashing end, though, on Lap 11 when he came unstuck at turn five, leaving his fellow Spaniard to take his Yamaha M1 to a sixth win of the season – his first at the Californian circuit.

Australian Casey Stoner finished in second place, 3.517s behind Lorenzo. It is Stoner’s best result of the year and his fourth podium in a row.

Stoner finished comfortably ahead of Valentino Rossi, who took his first podium since his return to racing after breaking his leg just a few weeks ago.

Rossi had to work for the podium, chasing down fellow Italian Andrea Dovizioso (Repsol Honda).