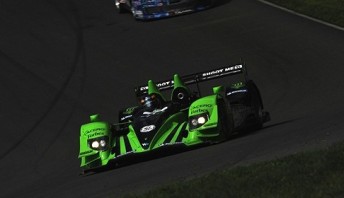 After securing his first pole of the year, and the 13th of his ALMS career, Brabham was running second in the race – with 15 minutes to go – when his Patrón Highcroft Sportscar picked up a puncture.

It was the second-consecutive year that Patrón Highcroft Racing had experienced a flat tyre at its home town event (in Connecticut). Last year the puncture also robbed the team of victory, forcing it to accept second place.

“At the end our car was getting better and better,” said Brabham.

“The telemetry showed we had a slow leak in the right rear and we were hoping it was going to last but it wasn’t to be.

“(We were) out there fighting it out for the championship and the win.

“We had our little issue on the straight but the tyre went down after we clashed (with Klaus Graf) and I went off the road.
“It was a fantastic battle.  Some of these races do amaze me because in the first part it doesn’t look like it is going to be much of a battle, then all of a sudden it’s game on.
“We’re racing for a championship out there and we still finished with a strong points haul.”

Despite the result Brabham has maintain his lead in the 2010 ALMS Championship.

The team now shifts its focus to the next ALMS race in Ohio in a fortnight’s time.

David Brabham will return to Australian in early September to test with IRWIN Racing ahead of the L&H Phillip Island 500, the Supercheap Auto Bathurst 1000 and the ArmorAll Gold Coast 600.