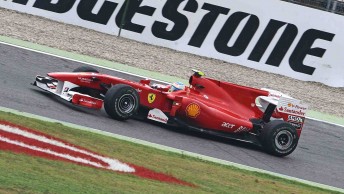 Massa led from the start of the race until lap 49 when his Ferrari team relayed the message to Massa; “Fernando is faster than you. Can you confirm you understood that message?”

Alonso passed Massa with ease on the exit of the hairpin, racing onto his second win for the year. The result has elevated him back into championship contention after a succession of difficult rounds.

Massa, winless since the final race of the 2008 season, remains in eighth in the championship.

While the result is sure to create varied chat amongst the Formula One pundits, the situation started thanks to a mixed start to the race. Red Bull Racing’s pole-sitter Sebastian Vettel was slow away at the start and did his best to block Alonso on the run to turn one. From third on the grid, Massa took the opportunity and drive around the outside of both, taking the lead and staying there until he was directed not to be …

Vettel finished in third place, setting a number of fast laps towards the end of the race (including the fastest time) placing Massa under some pressure, but not enough to genuinely challenge.

Vettel’s team-mate Mark Webber finished down in sixth place, battling through the race with some oil pressure problems, as well as a car that simply didn’t look settled.

Rounding out the point finishers, all a lap down, was Robert Kubica (Renault), Nico Rosberg (Mercedes), Michael Schumacher (Mercedes) and Vitaly Petrov (Renault).

The next round of the Formula One World Championship heads to Budapest next weekend.