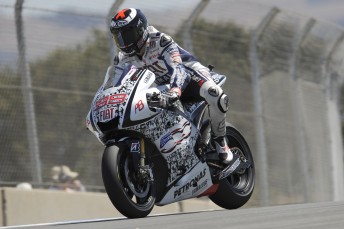 The Spaniard took his fifth consecutive pole position in a seesawing battle with Stoner. Having both lapped consistently fast it was the Fiat Yamaha rider who finally took pole with his penultimate lap of the session, a 1:20.978, which made him the only rider of the weekend so far to have broken the 1:21” barrier.

Ducati Team rider Stoner had competed with Lorenzo for the latter half of the session and led for much of it, his time of 1:21.169 the best of a consistent set of fast turns. The Aussie looked to be on the verge of his second pole of the season but eventually ended the session 0.191s off Lorenzo.

Securing third spot on the grid and taking his first ever front-row start in the premier class Repsol Honda’s Andrea Dovizioso was a fraction over six-tenths off Lorenzo’s marker, thus underlining the level to which the top two had pushed one another. Italian Dovizioso set his best time on his 36th and final lap.

Heading up the second row, which was separated by 0.071s, will be last year’s race winner Dani Pedrosa (Repsol Honda), who was just under four-hundredths off his team-mate. Monster Yamaha Tech 3 rider Ben Spies was impressive once more and will go for home glory from fifth after his final lap slotted him in front of Valentino Rossi, as the reigning World Champion secured sixth, repeating his position from both practice sessions.

Mika Kallio (Pramac Racing) had a crash at the top of the corkscrew at the very end of the session, following his fall in the earlier practice, and Roger Lee Hayden (LCR Honda) had a run off at the same spot and another at turn nine in a complicated session for the stand-in.