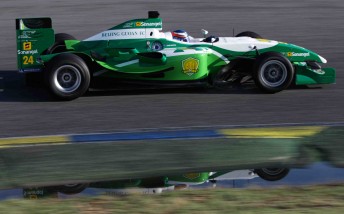 Australian international John Martin has finished 13th and seventh in the latest round of the Superleague Formula Championship at Zolder on the weekend.

Martin, driving for Beijing Guaon FC, qualified 16th and made up three spots in the first race to take 13th. He then took advantage of his opportunities to race to seventh place in the last event.

His results have moved the Beijing team to 14th in the football-inspired Superleague Championship points table.

At the pointy end of the field, Davide Rigon netted Belgian club RSC Anderlecht a home victory in the Super Final in the sixth round of the title.

The Italian grabbed the €100,000 prize from the five-lap dash-for-the-cash, completing a fine weekend which also saw him take second and ninth place finishes in the two 45-minute feature races to boost his championship hopes.

In the championship scores, Tottenham Hotspur lost its place at the top of the league table to Buurman and AC Milan after the Tottenham driver Craig Dolby was taken out in Race 2 and failed to score any points.

Superleague Formula resumes with Round 7 at Brands Hatch July 31-August 1.