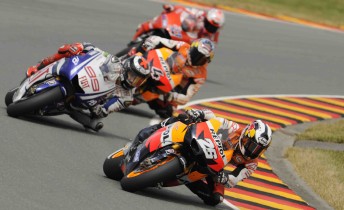 Pedrosa firmed his grip on second in the World Championship standings with the win, his second win of the season. Championship leader Jorge Lorenzo took second while Casey Stoner snatched third on the last corner of the from Valentino Rossi in his first race back after injury.

The original race was red flagged on lap nine when Randy de Puniet (LCR Honda) crashed at turn four. The incident brought down both Álvaro Bautista (Rizla Suzuki) and Aleix Espargaró (Pramac Racing), neither of whom could avoid the Frenchman’s bike which burst into flames.

The trio was unable to line-up for the shortened 21-lap new race after failing to return to pit lane with their bikes within five minutes of the red flag. De Puniet was physically not able, having sustained fractures in his left tibia and fibula in the incident.

As he had done in the original race, Pedrosa got his nose in front on the first lap, but Lorenzo quickly assumed the race lead.

The battle between Lorenzo and Pedrosa was developing into a thriller with the two Spaniards swapping the lead as they constantly looked for ways through on one another, and Pedrosa was at his best as he set a new circuit lap record on lap 10 and then again on 12, assuming the race lead and breaking his own record from the previous year.

Pedrosa eventually crossed the line first, 3.355s clear of Championship leader Lorenzo thanks to a faultless ride, with Stoner edging out Rossi for third with a final corner move that handed the Italian fourth on his return from injury.

Lorenzo now has 185 points at the top of the standings, with Pedrosa second on 138 and Dovizioso third on 102. Stoner moves into fourth, 19 points off Dovizioso.

The next round of MotoGP will be held at Laguna Seca (Mazda Raceway) in one week.