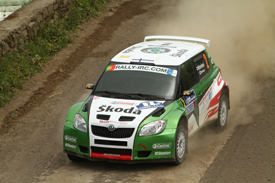 Two tenths of a second will cover the top three cars when Sata Rallye Açores, round seven of the Intercontinental Rally Challenge (IRC), resumes tomorrow.

After the opening three stages, title leader Juho Hänninen holds a 0.2s advantage over Bruno Magalhães with Andreas Mikkelsen tied on time with the Portuguese driver. The trio claimed a stage victory apiece as the gravel event on the Atlantic archipelago got off to a thrilling start.

Magalhães, running fourth on the road in his Peugeot Sport Portugal 207 Super 2000, capitalised on the slightly cleaner road surface he encountered to go fastest on the opening stage.

Although he admitted to making a few mistakes on the next test, which Hänninen won, he still maintained his overall advantage. However, he said that he was too hesitant over a jump on the day-closing superspecial stage, which allowed Hänninen to move in front.

Hänninen, tackling the stages second on the road behind IRC champion Kris Meeke, said he was surprised to have gone fastest on stage two after reporting a slippery stage surface due to the loose gravel. He attempted to counter this by carrying two spare BF Goodrich tyres in his Škoda Motorsport Fabia S2000, which he said had helped the balance of his car.

Running sixth on the road, Mikkelsen said he had struggled through stage two after being forced to make his pacenotes for the test during the fog-hit reconnaissance on Tuesday, but was otherwise delighted with his performance in his M-Sport Ford Fiesta S2000 after recording his first stage win in the IRC.

Jan Kopecký is fourth overnight and will hope that his Škoda Motorsport mechanics will be able to plug a small hole in his Fabia S2000, which ingested clouds of dust during the opening stage, as well as repairing a broken clutch, which faltered seconds before the start of the superspecial stage.

Meeke described driving first on the road through the loose coating of surface gravel as “impossible”, while co-driver Paul Nagle admitted they feared they had picked up two punctures on stage one after running wide and clouting some rocks.

“You could see the times of the guys running further back were much faster than those running up front and that was definitely the case for me,” said Meeke, who is sixth on the road for day two and well-placed to capitalise thanks to his superior starting position.

“It was so easy to make a mistake because it was just so slippery.”