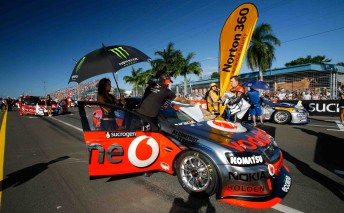 V8 Supercars CEO Martin Whitaker says that the Sucrogen Townsville 400 will be hard to beat for the year’s best event after another ultra-succesful race meeting.

The second-running of the street race attracted another huge crowd, although it did fall short of 2009’s overall mark.

Whitaker says that the people of Townsville should be proud of the fact that the city has the region’s biggest annual event in northern Queensland.

“What an incredible weekend,” he said.

“When you consider we had huge crowds on all days that’s a very real demonstration of a community that really gets behind and supports this event.

“The Sucrogen Townsville 400 won the award for the best event in the Championship last year and judging on this weekend they will be hard to beat again.”

Last year, the Townsville 400 won V8’s prestigious Event/Promoter of the Year award in its debut meeting.

According to V8 Supercars Australia, corporate facilities were a sell-out and more grandstand seating was built to cater for the demand.

V8 Supercars, Queensland Government and the Townsville council have a locked in five-year deal to host the race (ending 2013), with a further five-year option.