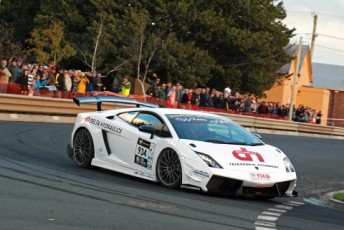 Jason White on his way to winning this year's Targa Tasmania

The 20th running of Targa Tasmania in April next year will be the final round of a new national motorsport series with the formation of the Australian Targa Championship (ATC).

The ATC will commence in north-east Victoria with the all-new Targa High Country event from November 5 to 7 this year. Round two of the series is the Hobart-based Targa Wrest Point on the last weekend in January 2011, with the three-event series culminating in the week long Targa Tasmania from April 5 to 10.

The championship will include five competitions, with categories for Classic Handicap, Classic Outright, Early Modern, Modern and Showroom cars.

“The championship will have a consistent set of regulations and formats, and promises to create much interest in the motor sport world with all entries scoring points automatically,” said Series Organiser Mark Perry of Octagon Australia.

“The winners will rightly be able to boast that they are the champion tarmac rally driver in this country.

“We’re very excited about the championship, and believe that it will once again be well supported by competitors.

“We have already received 220 entries for Targa High Country, which is getting towards the entry numbers for Targa Tasmania, so we’re expecting an exciting event.”

Record numbers are expected to participate in the 2011 Targa Tasmania given its 20th anniversary status, and Perry believes it is appropriate that the final round of the new series provides bonus points.

“Targa Tasmania results will attract double points over the other two rounds, which maintains its status as Australia’s premier tarmac event,” said Perry.

“It is a six-day test while the other two rounds are run over two or three days, and everyone knows just how hard it is to win.

“It also means that the Championship goes right to the wire, with no-one knowing the results until the very last day of competition.”

The dates of the Australian Targa Championship (ATC) are: