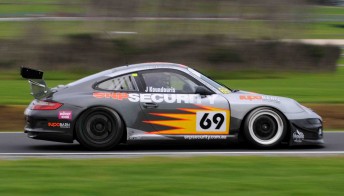 Ron Harrop looks set to have an association with the Australian GT Championship.

The legendary motor sport engineer, whose career is linked with drivers such as Norm Beechey and Bob Jane and teams including Holden Dealer Team and Holden Racing Team, was present at the Phillip Island round of the Vodka O Australian GT Championship last weekend, working with Australian GT management.

Harrop was there in the official role as guest Drivers Standard Officer, replacing Cameron McConville who was competing with V8 Supercars team Gulf Western Oils Racing at Townsville.

There is a chance, however, that Harrop could well have a permanent future position in the championhip.

Harrop was looking at the technical aspects of the GT category, which he said “found most interesting,” and is already on the case in respect of two engine failures that occurred in the Tony Quinn and Ash Samardi Moslers.

Ken Douglas of Motec fame was also in attendance with the GT group looking to develop software to link into the mandatory GT3 cars V-Box systems to provide more data for parity decisions and car technical specification compliance.

On the track, James Koundouris had his best-ever Vodka O Australian GT result with two race wins at the fast Phillip Island circuit in Round 4 of the championship.

Koundouris was pleased with his first wins in the sports car category.

“It was a great day and a great feeling to have my first GT win and then to follow it up with victory in the second race also after a huge battle with Max Twigg,” said the Canberra-based driver.

“The Superbarn Supermarkets Porsche was fantastic and the two victories are a great result for the entire team.”

It was a horror round for title leader David Wall. He finished 16th in Race 1 after a loose rear hub saw him take 16th. He raced through the field to take fifth place in Race 2.

Wall continues to lead the championship over Hackett, Grant, Koundouris and Greg Crick.

The next round of the Vodka O Australian GT Championship will be held at Mount Panorama, supporting the Supercheap Auto Bathurst 1000, on October 7-10.