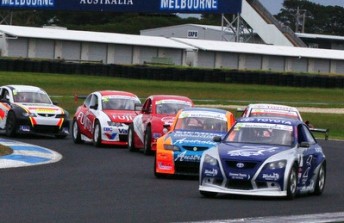 The Aussie Racing Cars Series is looking at securing more time as a V8 Supercars support category next year.

The popular pint-sized racing class was once a regular on the V8 Supercars Championship Series support bill, but has only been seen once at a V8 meeting this year – the Clipsal 500.

Next year, the Aussie Racing Cars hope to get back with the V8 Supercars, and as many as six rounds could be held with the V8s.

Category manager Phil Ward told Speedcafe.com.au that both himself and V8 Supercars Australia are interested in doing a deal.

“V8s have asked us to do more rounds next year and I’ve submitted a proposal,” Ward said.

“I’m hopeful of finding out soon. Martin Whitaker and Shane Howard from V8 Supercars has been very good to deal with so far, and they’ve always known that we’re one of the most popular support categories, but the cost of competing at V8 rounds in the past have made it very hard for us to justify.

“I’m waiting now for a new proposal to come through from V8s. Hopefully we can finalise our program for next year soon.”

Ward says that ideally, he’d like to boost his series to eight rounds, with six rounds supporting the V8 Supercars and two with the Australian Superbike Championship.

In the latest round of the Aussie Racing Cars Series at Phillip Island last weekend, Adam Gowans bounced back into title contention with the round victory.

For Gowans, it was his first win of the year and has placed him just three points behind title leader Kyle Clews in the series fight.

“After being in a winning position in the first two rounds of the year, things didn’t go my way, so it’s nice to have a win on the board,” Gowans said.

“It’s brought a bit of momentum back to us, and with three rounds to go, it has made it wide open.”

Brad Ward finished second for the round, while Formula Ford racer Garry Jacobson put in a great drive to take third.

The remaining three rounds of the championship will be held at Queensland Raceway (supporting Superbikes), Eastern Creek (supporting the Muscle Car Masters), and the final round at the historic Lakeside circuit in Queensland.