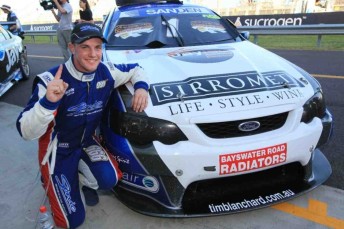 Tim Blanchard after his round win at the Townsville street circuit

Tim Blanchard’s Fujitsu V8 Supercars Series round win at the Sucrogen Townsville 400 has almost certainly secured his place in the Castrol EDGE Commodore alongside Greg Murphy for the L&H 500 at Phillip Island.

Blanchard took his first round win in the second-tier V8 Series at Townsville in only his fourth-ever V8 round.

The only box that needs to be ticked off to secure his drive is from title sponsor Castrol, and the win will make it almost impossible for them to say no.

The team’s original plan was for French World Touring Car driver Yvan Muller to drive with Murphy in the endurance races, but a WTCC date clash has seen him unavailable for Phillip Island. It is expected that he will be available to drive the Castrol Racing Commodore VE at the Supercheap Auto Bathurst 1000 and the Armor All Gold Coast 600 in October.

Team owner Paul Morris told Speedcafe.com.au that Castrol’s approval is all that is required to lock Blanchard into the drive.

“It makes it easier now to go to Castrol and say ‘hey, this guy just won a V8 round,’” said Morris.

“That should make it a pretty easy conversation to have.”

Blanchard said that the Townsville meeting has definitely helped his chances of driving with four-time Bathurst winner Murphy.

“It was a good result for us yesterday, and it goes a long way to help getting the endurance drive,” he said.

“The Morris family has helped me out with a few things this year, and it will be great to drive one his cars at Phillip Island.”

While Blanchard is still a V8 rookie, he says that he will have no problems adapting to the level required in the Championship Series.

“I reckon I should be OK. It will be a big step up, but at the end of the day, I’m going to be up against a lot of other inexperienced drivers as well,” he said.

“I’ve had plenty of laps in different V8s this year. I’ve done the four Fujitsu rounds, a couple of test days with my car and PMM, so I’m not lacking miles.”