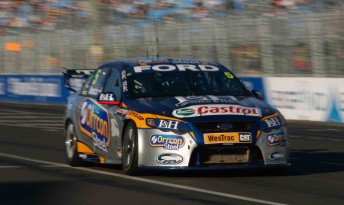 Mark Winterbottom has won a highly-entertaining final race at the Sucrogen Townsville 400.

The Orrcon Steel Ford Performance Racing driver led home championship leader James Courtney and Garth Tander, while it was a troublesome day for title contender Jamie Whincup, who suffered from rear brake problems in his TeamVodafone Commodore VE, finishing down in 23rd.

Winterbottom qualified sixth and snatched the lead during the first round of pit stops thanks to strategy, a speedy turn around by his team, plus slower stops by others. He held onto the lead until the end of the race.

The result has moved Winterbottom into third in the championship points.

After a controversial race yesterday, Courtney turned it around to take second place, extending his championship lead to 120 points.

The race went through a ‘smash spell’ on lap 42 when second-placed Tander understeered into the turn three wall, landing in the middle of the track. Courtney, following closely behind, baulked to avoid the stranded Commodore, only to be slammed into by Craig Lowndes, who had no where to go.

The incident ruled out front-row starter Lowndes, who was in line for a podium finish.

Fourth place went to Paul Dumbrell – one of his best-ever V8 Supercars race finish, who was one place ahead of Steve Richards, meaning Ford Performance Rcaing finished with all three of its cars in the top five.

Trading Post Racing’s Jason Bright was on song for fifth place with only a handful of laps to go before more engine dramas plagued him.

The V8 Supercars Championship Series now heads into its nine-week mid-season break. The next round of the series will be the L&H 500 at Phillip Island on September 10-12.